“The challenge of accountability, the managed-care meteor
hurtling toward Planet Therapy, has created the opportunity to
change the prevailing orthodoxy of psychotherapy”
(Duncan & Miller, 2000, p.65)
Sept. 2000**

Over the past 40 years research into therapy outcome has intensified, whilst the the number of schools of psychotherapy has expanded to perhaps 300 or more, and yet this research continues to show that none stands head and shoulders above the rest (despite the claims of some, such as the cognitive behaviourists). In 1975 this verdict was called the ‘dodo bird verdict’ –gleaned from that passage in Alice in Wonderland where at the end of the caucus race the Dodo bird (which incidentally was a caricature of Charles Dodson [Lewis Carroll] himself as he stuttered when saying his name) declares “Everyone has won and so all must have prizes” (Luborsky, et al 1975). In a recently published comprehensive review of outcome research Neil Gordon has highlighted the shortcomings of much of this research in looking too closely at the differences between the various schools, rather than for what successful therapies have in common; and has criticized this research for looking to what the therapist is doing rather than the client’s assessment of the therapeutic relationship (Gordon 2000). Much the same is being said in Duncan and Miller’s books.

A number of reasons have been cited as to why both researchers and therapists continue to focus on therapists and their differing techniques rather than common factors and client’s views. Many say it is shameless self-interest which leads those teaching say dialectic behaviour therapy to turn out research claiming that it is the treatment of choice for borderline personality disorder. If no significant differences were found, and EVT’s (empirically validated treatments) turn out to be researched by those with a vested interest like much drug research which is funded by drug companies, then is there justification for more expensive post-graduate education and the de-privileging of lesser trained and cheaper workers? Kovacs (1996) in calling against an outcome evaluation database (rather than EVT’s) for American psychologist is quite blatant about this; he has no faith that a database from outcome evaluation will show that psychologists have any superiority over other providers, and this will “further bolster the tendency to seek lesser trained and cheaper workers” (p.30). So instead the professional bodies are turning their attention to supporting EVT’s rather than evaluating who is effective and who isn’t, and then of course, as Duncan and Miler comment, therapists can avoid or lessen their sense of personal blame for treatment failure. Other’s claim that the reason for not evaluating outcome on a case by case basis, and instead promoting the EVT, is that because psychiatry is doing it (in turn, because other doctors do it), and
and in order to compete therapists have to come up with their own EVT’s. It’s guild politics. Bad politics. 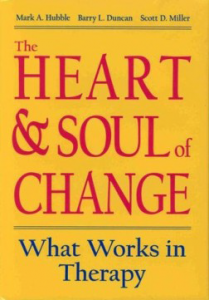 In The Heart and Soul of Change, Hubble, Duncan, and Miller talk about
their work in assembling the leading outcome researchers to review four
decades of research and it’s implications for practice. They came up with 4 factors (based on Michael Lambert’s work) and their percentage contribution to positive outcome no matter what the theoretical orientation and profession of the therapist was. Now it must be noted that for those with a postmodern sensibility, especially for those familiar with Wittgenstein, all positivistic research in the social sciences is to be regarded as a little suspect, and at best can provide us with a few hints of things we may wish to include in our considerations. Like Alice, we wander in a world which, at times appears to be set upon the solid foundations of a chess board, but has far more crazy and seemingly illogical turns, which is life as it happens. With that caution in mind let us look at what these researchers are indicating as being the matters we need to keep in mind in thinking about what makes for effective therapy. 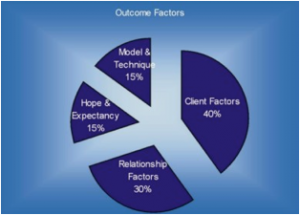 As you can see, model and technique, the gods of EVT researchers, seems to only account for 15% of the change in successful therapy. The most important variable is ‘Client Factors’. This is the stuff that clients bring into therapy, or are going on in their lives despite therapy. It’s their openness, their persistence and resilience, the families that support them through all sorts of crises, their humour and strength. Are there treatment models which help identify and
enlist these factors in service of the client’s goals? You bet. Do most treatment models encourage therapists to ignore client’s strengths in the search for
pathology? You bet. Also included in the ‘client factors’ category are those serendipitous events like a win of lotto, or a new love affair. The second to largest factor is the client’s perception of the therapeutic relationship sometimes called the therapeutic alliance. The client’s positive perception of a collaborative relationship in achieving the client’s goals is a far better predictor of success than diagnosis, EVT, therapist, or any other factor so far identified. There are now a number of paper and pencil instruments for monitoring the client’s perceptions of the alliance (e.g. Lambert & Burlingame, 1996; Horvath & Greenberg, 1989).

Given the importance of the therapeutic alliance a couple of studies are worth mentioning. Dunkle and Friedlander (1996) found that therapists who were people who enjoyed closeness in interpersonal relationships, were low in hostility, and had high social support were those who client’s rated a high
alliance with early in treatment. Further, they found no correlation with this factor and years of practice or training. And when it comes to working with families it has been noted that families rate the alliance higher when the
therapist uses circular or reflexive questioning processes than when they use problem definition and explanation type of discourse (Dozier, et.al. 1998). Similarly Hanson and colleagues (1997) reported that when therapists offered their interpretations in an interactive and collaborative manner (what some call ‘generous listening’ from a ‘not knowing’ basis) rather than didactically their clients ranked the relationship as deeper, and the counsellors as more expert,
trustworthy and attractive. Even amongst GP’s, research suggests that the therapeutic alliance, the clients perception of the therapeutic relationship, is just as important to successful outcomes in drug treatment of depression as the drug itself (Krupnik, 1996). Makes one wonder about other medicine.

There is now a mountain of research and literature attesting to this claim of Duncan & Miller’s that change principally stems from pre-existing abilities and conditions clients bring to therapy, and successful therapy is not based on a particular method so much as it is based on the ability of the therapist and client to weave an alliance which allows the client to tap those qualities so that the client’s goals, and theories of change can be realised. The opportunity also exists, because of increased demands for accountability, to change the orthodoxy of mental health. But that change is not going to come from the professional bodies, for they are shoring themselves up behind the wall of EVTs. The professional bodies are perpetuating the myth that the model of therapy is the most important contributor to successful outcome. Here in NZ, at this very moment they are working with the government in drafting a Health Professionals Competency Assurance Bill. Front line clinicians know that in order to maximise clinical outcomes, what they need is not standardized treatment models, but the tailoring of treatment to each client’s unique qualities and characteristics. Many are being thwarted from being able to do this because of demands from both professional bodies and health managers to adopt the EVT of the month. And shortly, it looks like, by law. By and large that revolution is not going to come from mental health managers, despite them being under enormous public pressure to show that their services are accountable. Too many of them are also being driven by advisors, who all too often are failed clinicians, and their advice, by and large is also to adopt EVTs. EVTs allow an avoidance of culpability, as when things go wrong either the patient can be blamed or the EVT blamed for its lack of being sophisticated enough yet.

The revolution that is occurring is one where the client is no longer perceived as a pathological loony whom benevolent therapists assist to live lives as second class citizens, to one were clients are perceived as resourceful motivated hunters in search of more satisfying lives. The leaders of these hunters, consumer groups, are powerfully positioned in this current climate of accountability, to demand that therapists not only show that each case is handled effectively, but that each session is also. Why can’t there be a database listing effective therapists? Let’s help Alice identify effective therapists.

* A reference Alice in Alice in Wonderland (via Grace Slick)

Dunkle, J.H., and Friedlander, M.L. (1996). Contribution of therapist experience and personal characteristics to the working alliance. Journal of Counseling Psychology, 43(4), 456-60.

Miller, S., Duncan, B. and Hubble, M. (1997). Escape from Babel : Toward a Unifying Language for Psychotherapy Practice . New York: Norton.